You are here: Home / Books / Quran Explanations / The Spiritual Cure 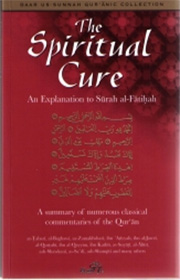 It is named al-Fatihah, the Opening – because it opens the Book and by it the recitation in prayer commences.

It is also named Ummul Qur’an, the Mother of the Qur’an, and Ummul Kitaab, the Mother of the Book, according to the opinion of the majority. This was mentioned by Anas, however al-Hasan and ibn Seereen disliked this appellation reasoning that this was the most fitting description for the Preserved Tablet.

Al- Hasan also said that the unequivocal verses of the Qur’an comprised the Mother of the Book. However, it is established in at-Tirmidhee from Abu Hurayrah (May Allah be pleased with him)who said, The Messenger of Allah (Peace and Blessings be upon him) said, ‘[the chapter commencing with] “all praises and thanks are due to Allah the Lord of the Universe” is the Mother of the Qur’an, the Mother of the Book, the Seven Oft Repeated Verses and the Great Qur’an.’ [i.e. Ummul Qur’an, Ummul Kitaab, Sab`ul Mathaanee and al-Qur’anul Adheem]

At-Tirmidhee declared the hadeeth to be saheeh. Al-Bukhaaree said in the beginning of the Book of Tafseer in his Saheeh,

It is named Ummul Qur’an because it is the first chapter written in the Qur’anic texts and the recitation in prayer commences with it. [Saheeh Bukhaaree [Eng. Trans. 6/1 chpt. 1]]

Ibn Jareer at -Tabaree said that it was named so because the meaning of the entire Qur’an is summarized therein. The Arabs named anything that concisely summarizes something or comprises the most important part of something Umm, or Mother.