You are here: Home / Books / 5 Pillars of Islam / The Night Prayer in Ramadaan 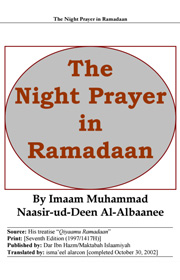 It has been reported in two hadeeths, the first of which is from Abu Hurairah, that he said: “Allaah’s Messenger (sallAllaahu ‘alayhi wa sallam) would incite (them) to perform the Night Prayer in Ramadaan, without firmly commanding them. So he (SAW) would say: ‘Whoever performs the Night Prayer in Ramadaan with firm Faith and hoping to be rewarded, his past (minor) sins will be forgiven.’ Then Allaah’s Messenger (SAW) passed away and the matter remained in this condition

The second hadeeth is that of ‘Amr bin Murrah al-Juhanee, who said: “A man from Qudaa’ah came to Allaah’s Messenger and said to him: ‘O Messenger of Allaah, what do you say if I testify that there is no deity worthy of worship except Allaah and that you are the Messenger of Allaah, and if I were to pray the five daily prayers and fast and pray the night prayers during the month of Ramadaan, and give the Zakaat?” So the Prophet (SAW) said: “Whoever dies upon this state, will be amongst the siddeeqeen and the martyrs.”
Download PDF