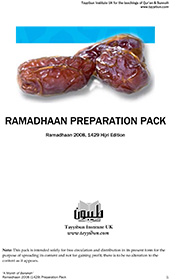 The objective behind fasting is to restrain the soul from (its) desires and to prevent it from those things, which are beloved to it. And its purpose is to control the soul’s strength, so that it can be prepared to attain what is found in it (the fast) from success and joy for the soul. Through the fast, one curbs his hunger and thirst and is reminded of the condition of the hungry stomachs of needy people.

Through fasting, one narrows the passages the Shaytaan has inside the servant (of Allah) by narrowing the passages of food and drink. Also, it prevents the forces of the limbs from getting too accustomed to things that are harmful to it in this world and the hereafter. And each of the soul’s body limbs and energies can cease their rebelliousness (to Allah) and be harnessed by its bridle.

So therefore, the fast is the bridle of those who fear and obey Allah ʹazza wa jall and the shield for those waging war (against desires). And it is a garden for the righteous and devoted servants of Allah. And it is for the Lord of the worlds, over all other actions (done to please Allah). This is since the person who fasts, in fact does nothing. He only abandons his desire and his food for the sake of the One whom he worships.

So fasting is an abandonment of those things that the soul loves and desires, preferring instead Allah’s love and contentment. And it is a secret kept between the servant and his Lord ‐ no one else is aware of it. Fasting has an amazing effect in preserving one’s outer limbs and inner capacities as well as protecting the soul from being overtaken by destructive components, which can ruin and destroy it. And it has a remarkable effect in causing all the harmful things that prevent the soul from being healthy to be emptied out. So fasting guards and protects the health of the person’s heart and bodily limbs. And it returns the soul all that the hands of the desires have taken from it. So it is from the greatest ways of improving one’s Taqwaa, as Allah ʹazza wa jall says: