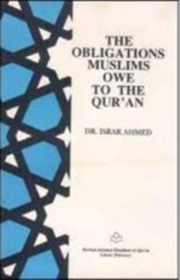 During the last decade (i.e., the sixties), international qir’aat competitions have become a regular feature in the Muslim World. These competitions, in which well-known qura’ from different countries have been participating to display their remarkable talents for the recitation of the Qur’an, have served a number of purposes. The large audiences who have been listening spell-bound to the recitations of the world-famous qura’ have always been moved by the unique melody, eloquence, and grandeur of the Qur’anic diction. This may have, temporarily, strengthened their belief in the Divine origin of the Qur’an. Moreover, these competitions have popularized tajweed (i.e., the art of reciting the Qur’an with correct pronunciation) in Malaysia, Indonesia, and Pakistan. The Muslim children in these countries today can recite the Holy Book with much better accent and intonation than they could possibly do a few years ago.

Without intending to minimize the importance of reciting the Qur’an correctly, one might ask the question: Have these competitions helped bridge the gulf that yawns between us and the Qur’an today? Or, have they established a real contact between us and the book of Allah (SWT)? The answer to these questions is: “No.”

Unfortunately, the great objective of establishing a real contact between us and the Qur’an has not been achieved even by the different religious seminars and symposia which have been held in our country and elsewhere during the recent years. The savants and scholars who participated in the discussions at these conferences and colloquia have generally dwelt at such topics as the greatness of the Qur’an, its beauties and marvels etc., but no attempt has been made to consider the fundamental questions: What are our obligations towards the Qur’an? And how can we discharge these obligations? So far as the glory and greatness of the Qur’an is concerned, we believe it is 7 indescribable and its adequate comprehension is beyond the reach of human mind. It is best known to the Lord of the heavens and the earth Whose word it is, or to His blessed Messenger (SAW) to whom it was revealed.1

Therefore, instead of making a presumptuous attempt at describing its unique merits, the most pertinent thing for us to do is that we should clearly understand our duties and responsibilities towards the Qur’an and then see whether or not we are conscientiously fulfilling these duties and responsibilities. If we find that we are not doing so, we should seriously think about the line of action we should adopt for their fulfilment; and then adopt the line without any further delay because our very salvation depends on our efforts in this direction. Paying pompous compliments to the Qur’an will not be enough and it cannot be a substitute for actually discharging our obligations towards the Holy Book.
Download PDF