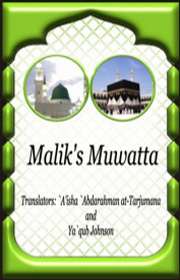 Malik’s Muwatta (“the well-trodden path”) is a collection of two items:
the sayings and deeds of Prophet Muhammad (pbuh) (also known as the sunnah).

The reports of the Prophet’s sayings and deeds are called ahadith.

And the legal opinions and decisions of the Prophet’s Companions, their successors, and some later authorities.

Malik (full name Malik bin Anas bin Malik bin Abu Amir Al-Asbahi) was born in 93 A.H. and died in 179 A.H. He lived most of his life in Madinah, the city in which the Prophet (pbuh) settled in. He was a preeminent scholar of Islam, and is the originator of the Maliki judicial school of thought. He is reputed to have had over one thousand students. During Malik’s lifetime, he steadily revised his Muwatta, so it reflects over forty years of his learning and knowledge. It contains a few thousand hadith.
Download PDF