You are here: Home / Books / Misc / Islamic Renaissance The Real Task Ahead 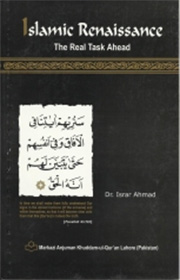 The present age can rightly be described as the age of the predominance of Western philosophical thought and learning. The Western ideas about the nature of man and
the universe are strongly upheld all around the world. Having taken shape roughly two hundred years ago, these ideas were continuously affirmed and reinforced by theorists and philosophers. Though politically, the present day world may be divided into a number of blocs, one single philosophical point of view prevails throughout.

This attitude has colored all human civilization and culture at the global level. No doubt some alternative view points are also found here and there, but they are of marginal importance. The people, both in the Occident and in the Orient, who really have a say in public affairs, political as well as social and cultural, are without exception adhering to this viewpoint. The dominance of Western culture and philosophical thought is so pervasive and universal that even the point of view of such people as are struggling against it in some countries turns out on closer examination to be itself greatly influenced by the West.

Indeed, they are themselves to a great extent Western in their approach and method and even in their purported ideology. They too think in terms of Western philosophy
and ideology with the result that they lose their impact and efficacy to oppose it.
Download PDF